Are you familiar with Littleton Avenue?

In 2012, Littleton Avenue was well-known as a run-down, high-crime block.

For more than a decade, Urban League of Essex County, along with local residents and community associations, have worked together to revitalize neighborhoods.

As part of the group’s initiative, the Urban League of Essex County built four new, affordable homes on Littleton. This started a positive chain reaction —

Then, private investments were generated

Next, a group of dedicated candidates received paid, on-the-job training in construction trades

Today, Littleton Avenue has one of the lowest levels of crime in its area and is known as a “model block” within Newark City’s plans for equitable development.

But it’s more than just improving infrastructure—neighborhoods are being healed.

They also work tirelessly to provide job and financial training for families and youth and coaching for local leadership development.

As one resident puts it:

“I’ve been on the block and I’ve seen it go up and down, but this is the best that it has ever been in 30 years.”

It’s amazing to see the great things that happen when people invest in their own communities. We are so honored to support ULEC as one of our ten social service agencies.

0 Experience the Impact in New Jersey

Did you know we’ve raised almost $1.7M in the last five years alone?

To put that into perspective, that’s —

Your generosity has empowered these agencies to meet the needs of children, families, and individuals throughout northern New Jersey.

We are honored to partner with you.

“To describe my mother would be to write about a hurricane in its perfect power.” —Maya Angelou

In honor of all the incredible things moms do in the world, we want to wish you a very happy Mother’s Day!

We want to give a special shoutout to these 5 amazing agencies that help moms and women reach their full potential.

Visit the links to learn more about each program and the impact they’ve made on the lives of moms and women in our community!

Make a Difference One Package at a Time!

Everyone’s got something coming in the mail these days.

How about doing a little extra good the next time you buy something online?

Donate a portion of your purchase to the Greater Newark Holiday Fund when you check out with AmazonSmile.

Here’s how it works:

We’re so grateful for your continued support.

Thank you for partnering with us in this new way.

P.S. Join the Urban League of Essex County in celebrating the past and future advances for communities of color through the R.E.D. (Racial Equity and Diversity) Gala on April 24.

Isaac and Hillory have a very special bond.

When Isaac was 3, he started living in group foster homes. He had gone through abuse and neglect, and was acting out because of it.

At 10, he moved in with Hillory who became his therapeutic foster parent— she was trained to help kids with exceptional trauma.

Hillory bonded with Isaac and taught him how to be a part of the family so that at the end of it all, Isaac could feel that he truly belonged.

“We cooked and ate dinner together, watched movies, went grocery shopping and to Great Adventure,” she says. “I also taught him to make crafts, and I would bring him with me when I volunteered at the local senior citizen center. The older adults loved talking to Isaac.”

Hillory also bought him his first suit and tie for a formal event. “It was important to teach him how to have pride in himself and present himself well,” she says.

Isaac has since gained confidence and learned to trust others, especially Hillory.

Their relationship has changed both of their lives for the better.

Just 18 years old, pregnant and homeless, Linda thought her only option was to drop out of school. But the people she met at @familyconnectionsnj helped her find another way. She stayed in school, eventually got 2 jobs and found her own place to stay in. She even made the Deans List at community college!

Linda says, “I realized that there are people who will help you.” She learned to get what she wanted in life by working hard to reach her goals.

“When you have a good job and you’re taking care of yourself and your child, that’s the best feeling ever.”

When you give to the Holiday Fund, you are part of the amazing work of Family Connections. Thank you for helping build a greater New Jersey!

We’ve been thinking about the year-long state of “pivoting” that organizations have endured — groups all over the world— but especially in our home state of NJ.

Despite the challenges, these service agencies have found innovative ways to continue clothing, sheltering, feeding and serving people who are experiencing dire needs.

This year, with Valentine’s Day in mind, we’ve compiled fun and purposeful ways to show NJ some love!

Here are 14 creative ways to show love to New Jersey this Valentine’s Weekend.

Will you keep in touch? Leave a comment and let us know how you decided to celebrate NJ this Valentine’s Day. We can’t wait to hear your stories and see your pictures.

You can show love to the Holiday Fund any time with a donation of any size; the 10 reputable agencies we support serve individuals all year long. Contribute safely and easily at https://holidayfund.org/give/.

Children’s Aid and Family Services of New Jersey (CAFSNJ) shared some inspiring words from Mo’Nique last month in a video posted to their YouTube account. She was addressing young mothers who are receiving a lifeline through Zoe’s Place, a CAFSNJ effort.

“Anything you think you wanna do, you can. Take this moment to rethink your process and your steps. And when you leave, put them to work. Everybody deserves a second chance. So take your second chance and make it work for you.

Zoe’s Place is run by CAFSNJ and helps pregnant and parenting teens with a lifeline to the resources, housing, and advocacy they need to build a brighter future. They provide safe, 24-hour supervised housing to young mothers and pregnant young women in northern New Jersey.

Pregnant and parenting teens are, statistically, the most vulnerable population of youth in the country according to Zoe’s Place. And, while some young moms have the support of family and friends, others have no one in their support circle.

That’s why Zoe’s Place exists. “Zoe’s Place is the lifeline that so many young women need during this life-changing experience,” says CAFSNJ

And hopefully, as Mo’Nique says, this lifeline helps young moms pay it forward.

Last year, Zoe’s Place supported 14 teen moms and their families. We are so proud to support the work of CAFS serving this vulnerable population.

2021 has arrived, and if you’re like many Americans, you’ve got some resolutions written down for the year.

Many resolutions about things to try, do, achieve, better, etc, and there are ways to work in a core strategy of generosity into many of them.

Below are five tips for incorporating generosity into 2021 resolutions!

Organize your belongings
Take stock of your things and keep only what you need. Consider donating your surplus to Thriftworks, a social enterprise run by the Urban League that employs individuals looking to gain skills for retail and customer service jobs.

Spend more time with your family
One great way to spend time with each other is to read (Check out our 10 Books About Generosity PDF). Or try these 10 activities that help teach your kids about generosity and kindness (Check out our 10 Ways to Raise Kids Who Give PDF).

Launch a new enterprise
If you’ve been sitting on a business idea, now might be the time to act! Consider donating a portion of your proceeds to charity on certain holidays that are meaningful to you. Here are a few coming up:

Eat healthier
Healthy meals start with healthy ingredients. As you shop for your own meal prep, why not help someone else with their meals too? The Catholic Charities needs volunteers to help seniors do grocery shopping for homebound seniors with no primary caregivers: http://www.ccannj.com/food_shopping.php

Foster new community
Whether you’re new in town or have been in Jersey since you were born, there’s always room for more relationships and connections. Meet like-minded people of all ages when you volunteer with one of our agencies, who are always in need of someone with an extra hand and a big heart —

Have more ideas? Let us know in the comments below! 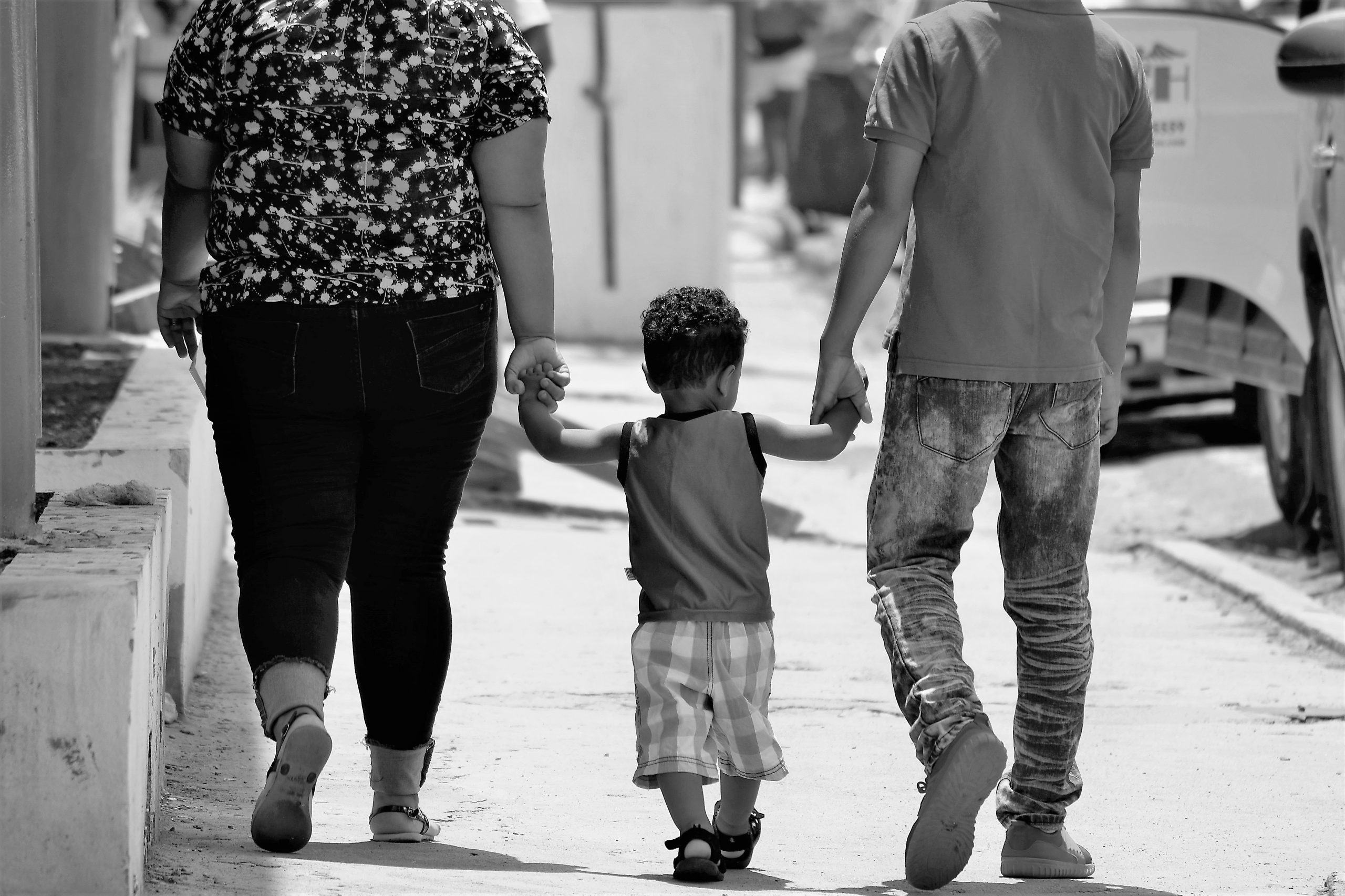 Chris needed a specific type of program to help him become the kind of father he wanted to be — one who could overcome his addictions and hangups, and learn to care well for himself and the needs of his kids.

Chris’s life was transformed — and his community was strengthened — through the Family Connections’ Strong Fathers program.

Before he came to Family Connections, Chris had been unemployed for 2 years and without a driver’s license. He had problems with family, anger, and substance abuse, and he was letting all of that get in the way of properly caring for his children.

He says he didn’t have motivation to get things done.

In the Strong Fathers program, he was taught about goal-setting, and once he began getting things done, felt satisfaction in his work. He expressed appreciation for his Family Connections counselor, saying:

“He’s my inspiration. He helped me with my anger, so now I catch myself before it happens. I let things slide off my back…most of all, he taught me patience with my children.”

Today, Chris is celebrating more than one year of sobriety. He has his driver’s license, a job and car, and joint custody of his children. Looking back on his time in the Strong Fathers program, Chris says:

“I had to do it for my children. They’re my motivation and my strength. I’ve graduated from Strong Fathers but I still go in to help the other men. I get support and direction and structure. Every time I go there, I learn something.

People say I’m a role model now. But I don’t see myself as a role model. I’m just a man, trying to take care of his kids.”

This is the power of equipping and educating. Your generosity makes stories like Chris’s possible.

Every donation to the Holiday Fund is funneled into programs that build a better future for our New Jersey neighbors. Imagine what would be possible if more fathers had access to programs like Strong Fathers from Family Connections.